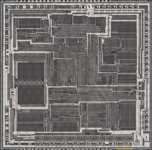 I think everyone who is interested in innovations in the microprocessor market is sometimes seen small photos of new crystals together with a description of their units and capabilities. But it was always interesting to see how looks like crystal under high magnification. Find these images is not so easy, but possible, especially if you know the right word …. 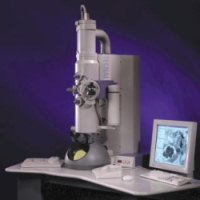 And the word is «DieShot«, which obviously sounds like “death shot.” The origin of the name is understandable, if you know that the producers never give high resolution pictures in the open access – is always classified information. Do these pictures in laboratories enthusiasts – quite simply exposing the chip and remove the crystal. It is clear that after such an operation, it is already “dead.”

Unfortunately, high-quality images of modern microprocessors, I could not find, probably due to insufficient resolution microscopes are used, if the chips look old, they are not enough, for example on the site visual6502.org have enough high-quality images of crystals and some of them are so detailed that you can see literally everything up to the individual transistors. High-quality images are quite large, for example, I downloaded the image crystal 80286 processor occupies 50MB and has a resolution of 9500 * 9366 pixels. This I understand is not the limit, but the best pictures have cost money.

Now more about what you can see and understand these images 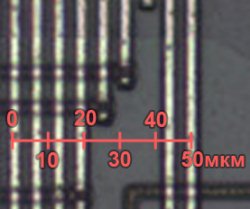 Try to determine the size and resolution of the image. We know that the 80286 processor had an area of ​​49mm square. is about 7 * 7mm. At the bottom there is a large-scale picture of our yellow strip, the length of 1 mm and if the trust that our picture of an area of ​​8.8 * 8.67 = 76.297mm.kv. It is substantially larger than stated in different documents. If you rely on the information on 49mm.kv. it can be conditionally considered that 9500 pixels this is 7mm, ie the picture contains 1357 pixels in one millimeter. The chip is placed on the process technology 1.5mkm, which corresponds to about two pixels in our image. It is a good idea! This means that we need in this picture even vaguely make out the smallest elements. In the above image you can see that in 10mkm fit only two conductors – with permissible error can be thought that the way it is. But with such large discrepancies will be better not to rely on the absolute size of the elements.

Interestingly, almost every chip I’ve seen there are some information and decorative elements pointing to authorship, producer group or series chip as if designed specifically for someone who will look at the crystal under a microscope. This chip is visible inscription “80286” and «intel 1982″. Also, if we pay attention to the edges of the chip, it is clearly seen on the perimeter of the contact pads. And some of them were not soldered wires, and some solder just two or even three – this is clearly the power supply.

Platform supply of information visually different and more wide-reaching of these tracks. In the photo is visible on the bottom left long pad VCC (looks like a “+ 5V”), from which a wide conductors diverge into the crystal to power the various units. Venues VSS (GND) often can be identified by running around the entire crystal wide conductors – similar to conventional electronic circuits. Near the same signal areas, usually it can be seen piling up of small elements, obviously representing a buffer matching element. 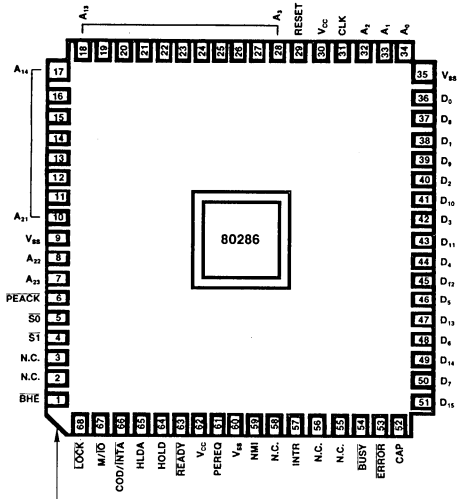 Looking at the pinout terminals can estimate how much the pads are. Note that data bus contacts are not consecutive and alternate – D0, D8, D1, D9 and so on. Venues address bus is also interrupted by the power contacts (it’s clear) and contacts CLK, RESET, which is probably due to some sort of circuit design considerations. As I saw later, a “disorder” is observed in the interior of the tire chip, alternating bits of one byte of the data bus to another. 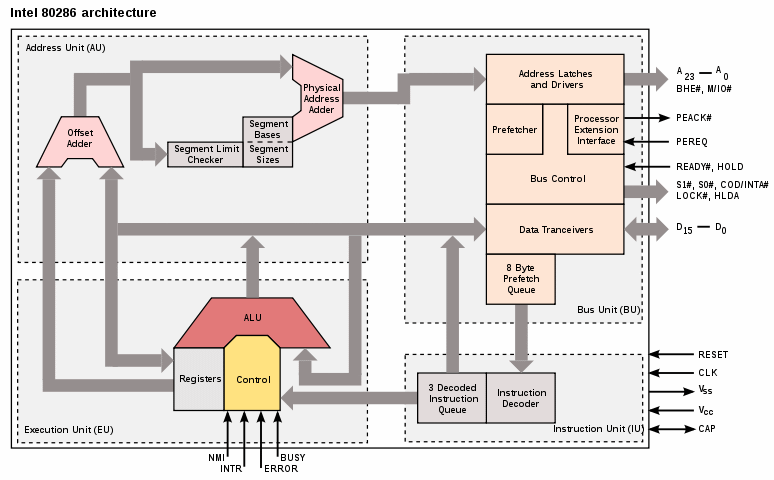 All I could find to describe the internal structure of the 80286 microprocessor is a very simplified diagram of indoor units that can be used as a hint. Further solving the internal structure of the crystal is very similar to the solution of a complex puzzle, and catch hold of something quite difficult. For example, despite the fact that I’m fairly said all 16 pads the data bus, it was quite difficult to trace at least one of them, because for them, are seen rather complex and poorly differentiated structure, and despite his knowledge of electronics to recognize the on-chip transistor -kondensator resistor is possible only in individual cases. 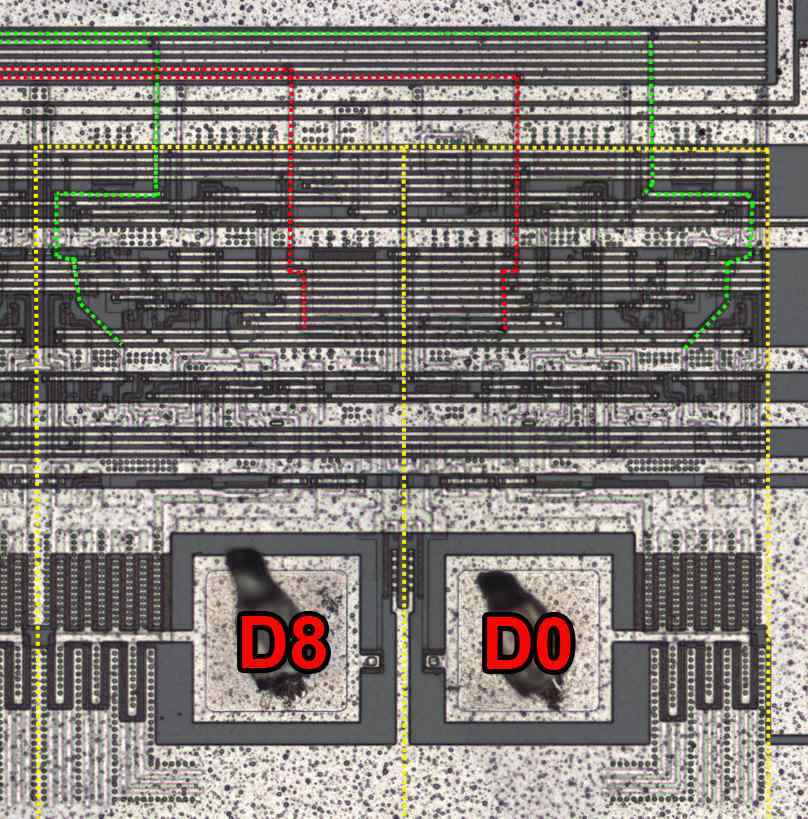 Here I separated yellow conditional blocks (performing similar functions to the buffer element D0 and D8), and if you look closely, you can see that they have a similar structure, mirrored with respect to the dividing line. Green dashed lines I outlined the information that I was able to be traced back to these units. Buffer elements needed for signal amplification and noise filtering, because it is often on the data bus, and the other coming from the signal processor, hung a serious burden. 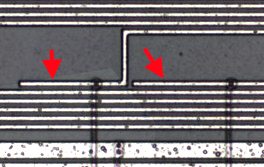 Another feature noticed that I was a little surprised – it’s hanging ends of the lines, the transitions from one layer to another. It would seem that such nezaterminirovannye ends can be a source of noise, but whether those frequencies that are running the chip it did not matter, whether it was made of some other reasons, but are found in the design of the chip are not uncommon and sometimes reach to a relatively large length.

It would be great if someone correct me or add to, and I’m just out of interest I will pick the chip on, but for the first post I think is enough.