These headphones have been remarkable Chinese bought me at aliexpress for $ 15 and a half years ago and I even almost started to demand the return, failing to include them almost daily. Most of the instructions states that in order to enable it to press and hold the call button, but in my case it was not working. It turned out that the headphones BH503 included if at the same time hold down the “Volume +” at the end and the call button. If you hold these buttons a little longer, then they move to the connection mode, as evidenced by the rapid blinking of the LED. In doing so, they actually differ from the branded headphones nokia.

One day, after a year of correct operation, I suddenly found that they did not get to recharge – they quickly turned down as not to keep them in charge. I had to disassemble. For those who want to dismantle them just say that in addition to the two visible screws, there is also hidden under a foam three pieces on the perimeter – without knowing it, I almost broke my body trying screwdriver to pry latch nonexistent.But even after I realized that there are cogs, had to tear the foam glued to reach them, so take them apart without tearing the rather thin foam rather difficult.

Replacement of the battery. 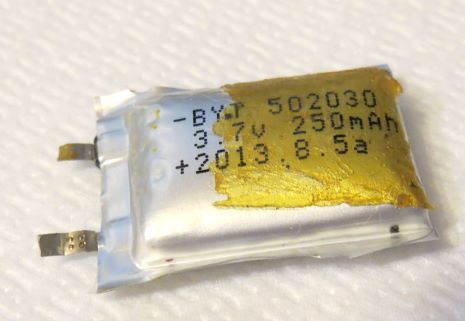 Another important point – in the ear is the buttons control board, and the battery is in the other ear. Not knowing this, I opened the first one and then another. Battery was there «BYT 502 030» Li-Ion 3.7v 250mAh and she was quite swollen. 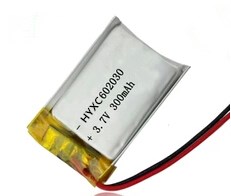 Climb on Ali, I decided to take a slightly larger and larger in capacity – “602030” on 300mAh $ 5, although in that case it really turned out to be written even come 320mAh. Of course, I was afraid that it will not fit, but still shoved without any problems and all is well earned.

All seemed well – after charging assembly went. It was possible he borrowed normally, and then when the headphones are exhausted, they are suddenly disconnected without notifying the signal as before. After another charge to use once did not, well, and the next day could not turn on – have been exhausted. I have decided that he is guilty of the charge controller, which in the previous battery was missing, and this has been.

This problem did not end there though. It turned out that if the headphones’ em off, they gradually run down. I measured the current consumption and found that if they are disabled 23mA current is stable. After switching on the current consumption of 20mA, and during music playback jumps between 20 and 40mA. If headphones are included but are not playing music after a few seconds they are moving to a lower consumption – about 7 mA, but once again, switch off the current jumps to 23mA. To solve this problem properly and failed, we had to bring out a couple of wires and solder to the microswitch, which is of course a few disfigured appearance.

The board signed by all in some detail – the battery, all the buttons, left / right channel test platform for flashing RX / TX, microphone, antenna and power supply. 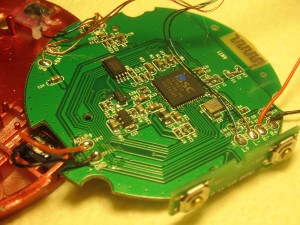 You can also see that the central chip of these headphones is marked IS1681S.Intelligible datasheet it could not be found, above all on the board there is also a flash in the 4K (chip 24C32)

6 thoughts on “Wireless headphones BH503. Dismantling and replacing the battery.”