Who using the raid controller with battery module, sooner or later required to face the need to replace this battery. I have a RAID-the Adaptec 5405 with battery worked for about four years, and then the utility began to show that the battery needs to be replaced. All anything, but go shopping, I suddenly discovered that this is the unit costs about $140! But judging by the size of the batteries and the words I assumed it would be easy to solder to the battery of a mobile phone worth about $3.

Firstly to make sure that the problem is really in the battery, not to say the controller board battery module I have it sealed-off from the board and poked a voltmeter in all four legs, trying to find a way out food, because there was only signed by one of the four sign (+). In all cases there was no tension. 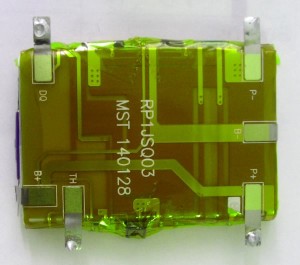 Himself charge controller, which is usually mounted on the battery is on a large flexible film side. This film was a kind of wrapped around the Li-Ion cell, I think that this was done for better temperature control. There have already signed all the sanity – perfectly clear conclusions “B-“ and “B +” to go directly to the battery, and the “P -“, “P +”, with which the output voltage has obviously goes to the board itself. We tear off the contacts from the battery, and unfold the film. 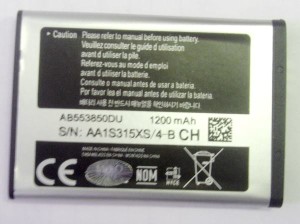 To replace the battery, I bought a samsung 1200mAh 3.7V. She turned out to mean a bit more of my and I thought it was not very good, but it was not very important, because it could stick whatever. Then of course it took to get it open and the battery itself, throwing regular charge controller, which usually there is stuck on in the form of a thin flat scarves.

It turned out that if you remove the battery, then its dimensions it becomes completely identical to that of standing inside the controller! That’s why I brought previous photo batteries purchased – it is 100% fit. Small problem consists in the fact that at the standard battery negative and the positive terminal attached to the body by two different parties, and a mobile battery on the one hand they are close (to them and hanging handkerchief charge controller).

The solution was simple – a flexible film tracing the path from the contact B + see that it is directly connected to the terminal P +, and there is already a mobile terminal of the battery at a stretch but it gets! Solder terminals wrap. Voltmeter to measure the voltage at the P- and P +, make sure it’s there (I had a 3.95V). Solder the battery itself back on the module with four contacts.

We put, turn. Glad we are seeing as the green LED next to the battery.

Finally make sure the utility Adaptec storage manager shows that everything is normal and the battery is charged.